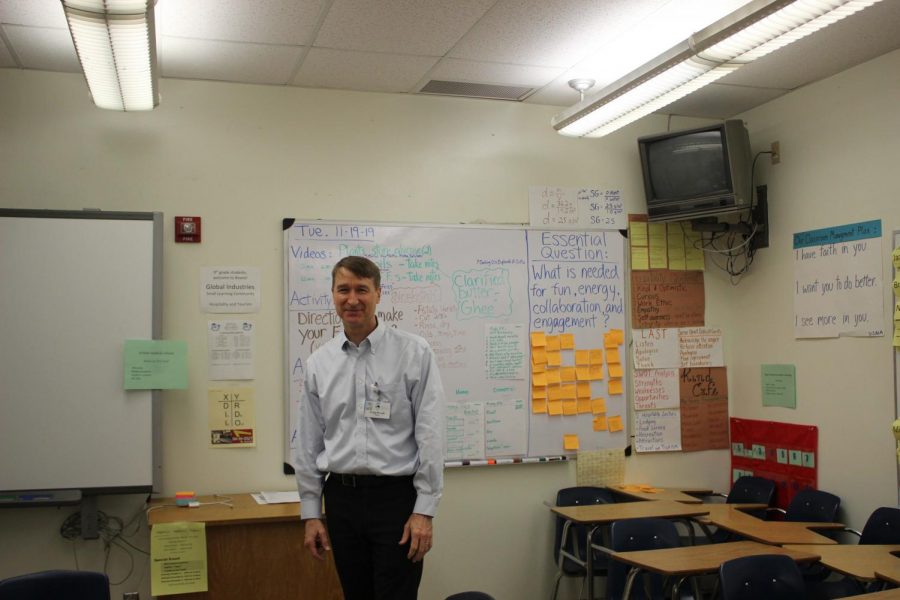 Craig Rhoads is a hospitality tourism teacher at Bowie High school, and he also teaches online math courses as his side job. His classroom is called the kindness cafe, which has a beautiful decoration on his door, and the inside of his classroom is filled with amazing posters that contain meaningful messages. Fun fact, he said he went to college with Bill Nye the science guy!

In this interview, Mr. Rhoads talked all about his teaching career and the experiences he went through. Surprisingly, he started out as a manager and then decided that he wanted to spend the next few years teaching.  He went back to school to receive his certificate in teaching. He first started teaching as a special education teacher at Americas High School.

”I was a manager for many years and then I decided that I wanted to spend the rest of my working career teaching, so I had  to go back to school to get a certificate to teach and then when I started, I began as a special education teacher at Americas High School,” Mr. Rhoads said.

His schooling was very important throughout college, he needed his degree to become a hotel administrator and later his teaching degree.

“Well, my college degree was in hotel administration so it really wasn’t directly related to teaching at all,” Mr. Rhoads said.

Mr. Rhoads talked about the obstacles he had to face to get to where he is today. When being a manager, he always had to be at the top, which caused him to miss out a lot on his family time and made him stressed. Along with those obstacles, he said that along the way, mostly his advisors were there to help him and guide him through out.

Thankfully, he is now teaching as he wanted to. One of the accomplishments that he is proud of is that he gets to help other teachers that are beginning their teaching career or just don’t know what they are doing, so he helps get them back on track and makes them focus on what they really want.

He said one of his future plans is looking forward to being able to keep on teaching at Bowie for as long as he can.

Mr. Rhoads proudest accomplishment in life is being able to take care of his children, because he believes that the way you take care of your children represents what kind of adult you are.

Mr. Rhoads advice to a young relative would be, “To know yourself before anything. You need to understand your perks and be able to solve them before anybody else.”