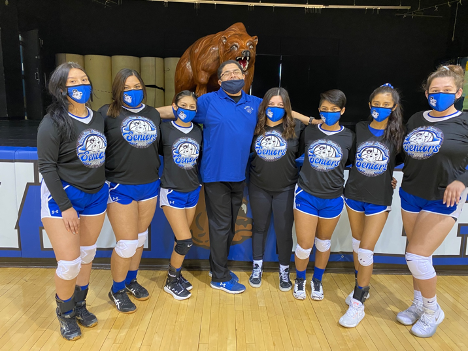 On October 26, 2020, all student-athletes were quarantined for two weeks due to the spike of COVID-19. Once athletes were able to go back to campus and resume with practice, we decided to ask one of the coaches a few questions.

Ricardo Gonzalez, the head varsity volleyball coach at Bowie High School, thinks that the two-week sports suspension affected the girls in many ways.

“The biggest disappointment was that we were not allowed to travel as a team to play a tournament in Monahans, Texas. Not knowing if the season would happen caused much anxiety and stress,” Gonzalez said.

The girls’ summer workout was restricted and cancelled to the point where they couldn’t use the weight room nor condition. Most of their games were cancelled and they weren’t able to make them up.

“When we were finally allowed to begin our volleyball season the girls were very happy, excited and looking forward to playing. Their enthusiasm was through the roof. The girls worked hard to regain their volleyball conditioning as well as their game skills. We played a few games then we were forced to quarantine for two weeks,” Gonzalez said. “Once again, their morale was crushed. Not knowing if this would be the end of the season caused much stress as well as anxiety. After working so hard to get into volleyball shape their season was put on hold. Girls went through deconditioning, staying home once again was very hard for them. When we could resume our season, the girls had to regain their volleyball conditioning once again.”

With that being said, we asked coach Gonzalez if he thought that his volleyball players should be playing with a very strong pandemic going on.

“The girls should be allowed to play during this pandemic. We are and have followed all the necessary precautions that have been mandated by the UIL and our district to keep everyone safe.  The coaches disinfect any equipment used by the girls and the girls wear a face guard during practice and games.  Girls fill out a COVID-19 questionnaire before arriving for practice, coaches check all questions that are answered, if any question should be answered ‘yes’ then that girl is not allowed to practice nor attend games,” he said.

The team had a very short schedule, many games were cancelled just to keep the safe, yet they wanted to play. With 25 games being removed from their schedule, to only playing 10 games during season, Coach Gonzalez says he feels a bit disappointed.

“I am not happy that so many games were cancelled and never made up. I am disappointed that we were not allowed to play any tournaments. I wish I could have taken the team to play in the Monahans, Tx tournament. They would have learned how to play against tough teams. The experience would have been one that they never would have forgotten.”

We know that the varsity team had played some very good game, and still held their head up high when their season was cut short, they would still remember what a great season they had.

“Girls are very disappointed with the quantity of games they played. They were looking forward to traveling, as a team, representing Bowie, and going to play tough teams in Monahans. Although they are thankful for being allowed to play some games, they wish they could have played more,” Gonzalez said.