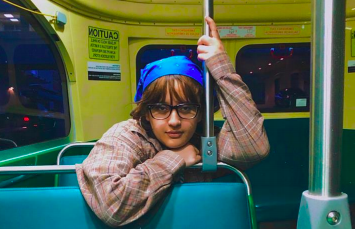 Andrew Garduño, a senior attending Bowie High School, has partaken in photography ever since his freshman year when he had little to no experience with a camera. He became interested in photography after taking a journalism class, which included the use of cameras and thus, sparked a passion for capturing art work with a click and a flash.

“I was actually enrolled in journalism class, so I thought that was my gateway into photography and it kind of was. I would be allowed to work with the cameras and stuff like that. I feel like when I started working with the cameras, slowly but surely, I began to gain a real interest in it” said Garduño.

After taking the time to really learn about the functions of a camera, as well as appreciating photography as more of an art form, rather than just simply taking a picture, Andrew then began to develop a preference for the style that he would soon try to implement into his own work.

“I like to create portraits, but not just that, I want to create a story with portraits and I want to embody an editorial type of style. I still haven’t fully experimented with that, but I do love editorial fashion photography and I do want to steer towards the editorial photography side of things,” he adds.

Despite there being so many different styles of photography, Garduño is drawn towards a mix of inspiration from older decades like the 1960’s and other photographers who use a future-esque theme in their own portraits.

“I am into editorial fashion and I kind of want to…play with different themes, I’m not sure, I just want to create my own theme. You know…it’s very difficult, nothing in this world is one hundred percent original, but I do want to see what my ‘niche’ is I guess you could say. There’s some photographers that love to do like a vintage type of style, they like to pay homages to older decades, whether that’s in their editing or in the clothing that they tell their models to wear, ” Garduño said.