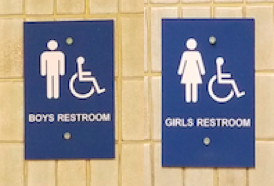 You’ve most likely heard about the new restroom rule that was introduced not so long ago. According to the policy, it states that no one is allowed to leave the classroom for the first and last 15 minutes of class. This means that neither students nor teachers can go to the restroom during this wait period.

Some students approve of this new rule, while others believe it is a total inconvenience. “It’s pointless because you can’t go to the bathroom in advisory,” one student said. Because advisory only being 15 minutes long, the new rule prevents students from leaving the classroom for the entire advisory period, which makes it understandable for students to be frustrated because it basically forces them to wait a full 30 minutes in order to use the restroom.

Not all students are responsible for having the opportunity to use the restroom. Some students go to other classes or are just roaming around in the halls wasting time for the students that actually need to go. Similarly, one student quotes, “Some students come to class just for attendance then leave to the restroom but never come back.”

Some teachers also have a say on what they think about this new rule. “I like the first 15 minutes because it encourages students to get to class on time, but not so much on the last 15 minutes because of classwork intervening with the remaining time,” one teacher explains.

Even though it doesn’t affect the way class is taught, teachers seem to think that it is unfair for the students, “because they’re not saying that they can’t go, they’re just limiting the amount of time that they can.”

It’s clear that this rule has its pros and of course along it, its cons. Nonetheless, for the most part, it seems that the majority of students, and some teachers teachers, disagree with the new routine.