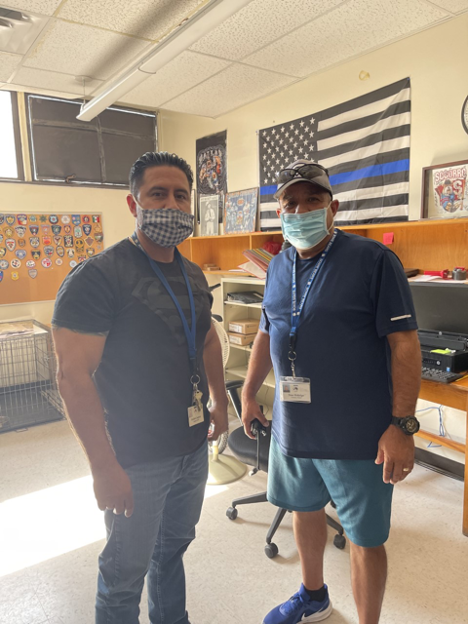 ’To Protect and Serve.”

Officer Pulido, Andy Jaquez, Ms. Gasca is the patrol team that works here in Bowie High School to protect us.

Officer E. Pulido wants to protect and serve our community so it’s safe for us to go out and be safe. Officer Pulido decided to choose a hard career but knowing he will enjoy it.  ‘’Don’t go for the easy,’’ he said.

Officer Pulido says the least favorite part of his job is ‘’arresting the future. ‘’He said that because he hates arresting teens because he wants to see teens do productive things.

One day, he was being called out to go and see what happened in a car accident; he went and he saw the most horrible thing, he saw a body almost decapitated for him it was hard to sleep at night because he used to remember the face of the guy.

A daily part of his day is to write reports, help, and serve. Andy’s goal here in Bowie is to see respect and help kids make the right decisions. Andy choose this job because he was already retired from being a police officer.

‘’From hot to cold,’’ the thing he hates the most from his job is walking in the hot sun or when it’s too cold.

The most traumatizing thing for Andy was one day that he caught a kid who was ‘’ high’’ and the kid started watching some sort of visions that Andy was a monster. ‘’It led me to not sleep for 2 days,’’ he said.

Usually, the team walks through school and makes sure everyone is in class. Ms. Gasca says, “helping the special makes my heart full.” Ms. Gasca’s favorite thing to do is help special kids because she likes to see them smile.

The reason why she chose her job was because she wanted to try something new. The worst part of her job is when there are fights. The most traumatizing experience for her has been all the fights since the beginning of the year.

Her daily basis is the same as Andy, making sure everyone and everything is good and make sure kids are doing right and doing what they are supposed to. ‘’We are a team here to protect,’’ Officer Pulido said.