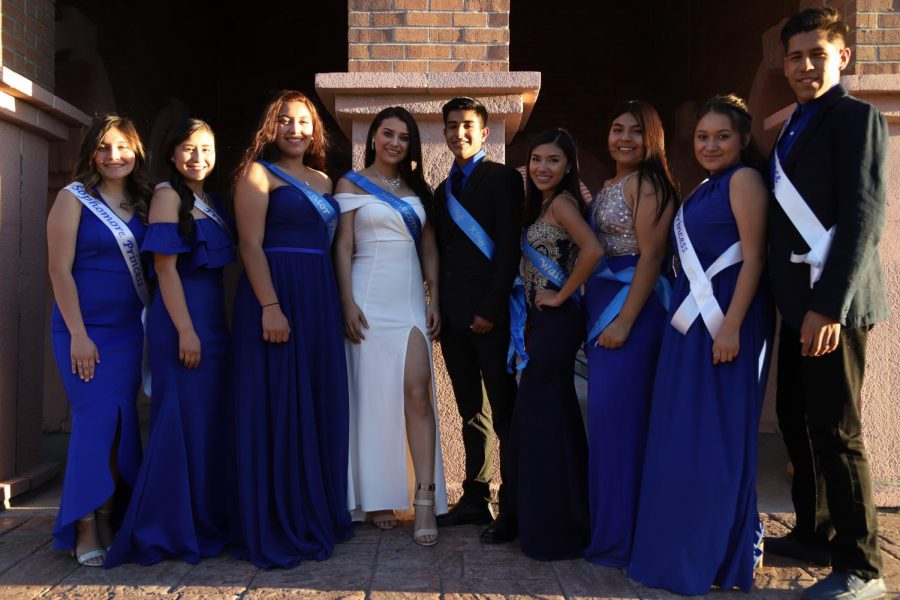 Homecoming is the most waited week for all the students, although for the homecoming court, it was a very special phase in their high school experience.

Winning comes with many mixed emotions and for Nataly Herrera, this year’s queen, it was a remarkable moment once the results came in.

“I’m really happy and I’m really thankful for everyone that was out there in lunch time , not only in lunch but they’ve always been supportive towards everything that I do,” Herrera said.

For Herrera, winning homecoming queen was a big achievement especially because she won her freshman year, too.

“Well my freshmen year was so exciting like I was really nervous although I wouldn’t do my speech , and now that I think about it three years later, I’m going to be up there doing my speech and being able to walk in the white dress it’s really exciting,”Herrera said.

“ I’d say that I ran for my best friend since she couldn’t be able to run for it this year and I wanted to do it for her and for everyone at Bowie,” Herrera said.

For Sergio Moreno, being able to hold the crown as king and being known was very unexpected.

“Well honestly I was really excited and at the same time it was shocking knowing that I won,” Moreno said.

Even though it all started as a joke with his friends, he then was encourage to sign up and ended up winning king.

“My motivation was excellent friends, and the others would tell me, it all started as a joke,” Moreno said.

Even though Brisa Rivera didn’t get the title to be the homecoming queen, she got lady-in-waiting and was still very satisfied with the results.

“It wasn’t surprising to me because I didn’t expect to be queen and I didn’t want to get my hopes up but it feels good to be part of the court,” Rivera said.

The thing I most look forward for homecoming is the assembly of course,” Rivera said.

Rivera ran for princess her sophomore year and noticed a difference between the two.

Leslie Soto was one of the two princesses that won for the senior class. Soto was filled with joy once the results came in.

“Well I was really happy because didn’t really expect it so it’s an honor being part of the homecoming court and its something different because I was never really into that until now,” Soto said.

When it comes to voting your representation of yourself and the things you do to get votes comes in handy.

“I did a poster because that’s all we could do and I just relied on my friends and whoever knew me or supported me I didn’t really do anything else,” Soto said.

Ashley Ramos was very happy when she heard she was part of the homecoming court as a princess.

“I was happy with it because I thought I wasn’t going to be a princess but then next thing you know i was a princess,” Ramos said.

The most exciting part for Ramos was being able to walk in front of everyone in the assembly.

Karenth Reyes said he ran for prince, a position that’s never been offered before to juniors, because he wanted to try something new.

“I thought that it would be so nice to run for homecoming prince because it will be like a new experience for me, so yeah,” Reyes said.

Reyes said he went to the proper individuals on how to qualify on becoming homecoming junior prince but he was stressed due to the limitation on spreading the word to vote for him only through a poster.

“It was kind of stressful for me because I would like to be spreading the word with everyone. So, they could know that I was running, but I guess it was so stressful for me,” Reyes said.

Reyes said that becoming the homecoming junior prince was a positive emotional experience.

“It was so excited for me. I really love the idea that I won because at the beginning I was kind of scared that I wasn’t the winner,” Reyes said.

Reyes said that he was excited on the fact that he won the title for homecoming prince and he thanks his family for supporting him to become the homecoming junior price.

“Yeah, they did help me and my mom especially. She helped me a lot doing the poster and my outfits and everything,” Reyes said.

Fernanda Ortiz said that she was excited to run as a junior princess because she wanted to demonstrate her school pride to everyone and have fun.

Ortiz said that she wanted to spread the word through other means than a poster like a campaign.

“I didn’t like the idea just doing a poster. I think it would’ve been so much fun if could we have campaign and brought food and involved everyone,” Ortiz said.

“I was excited and mostly surprised because I didn’t feel like I was gonna win and I thought that the odds with me,” Ortiz said.

Ortiz said that her family was happy for her on becoming homecoming junior princess and that she had their full support when it came to running for the homecoming court.

“Yeah, my family was very excited when they found out that I won. They tried helping me in everything, getting my dress and getting prepared,” Ortiz said.

Alexa Scott was really happy she won sophomore princess, most of her support were her New Tech friends and teachers.

“I just promoted and showed the poster to mostly New Tech and I told my friends to vote and support the homecoming court and everyone that was in it,” Scott said.

Keyla Flores won princess for her freshman class, out of all the events she was looking forward to becoming part of the homecoming court.

What did you think about Homecoming?